Who thought building in February was a good idea?

It's been a couple of weeks since my last post, had hoped to put in an update or two before now, but time has just got the better of me with the spring madness and all it brings. Thought I'd add an update about the build we started in the middle of February - the post from the 18th of Feb has drawings, 3D models and describes the client brief. We've been pretty much finished the landscaping for a few weeks now, we were just waiting for the walls to dry and then get them painted, which should happen in the next few days. 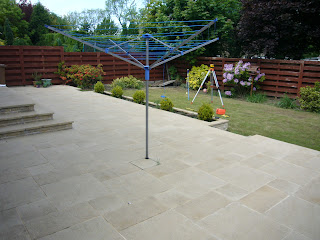 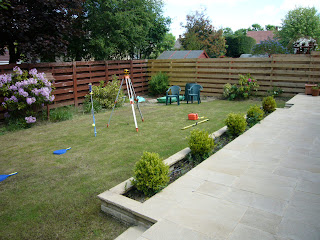 These are photos from the survey, you can see the existing patio is fairly dominant, making the garden feel very wide and shallow. Some sort of dining patio was required, as was a place to dry clothes, but we've cut quite a bit of it away as you can see from the photos below. The design also involved replacing the low planter at the front of the patio with a step which helps link the existing patio with new garden. This was the first week and the guys made amazing progress in that first week - marked out, foundations dug and filled, patio cut away, one planter built and the corner seating area is well on it's way. 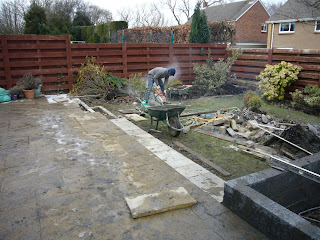 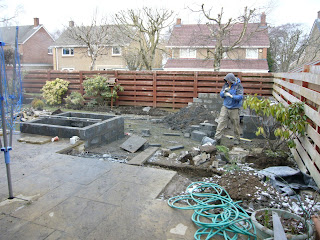 The weather turned especially bad a few days later and the conditions were terrible - incredibly cold and unpleasant, making wall building almost impossible and the site turned into a boggy muddy mess. And then the snow returned, which looked pretty but pretty much stopped us in our tracks. 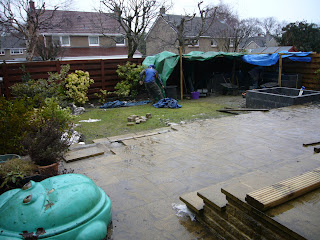 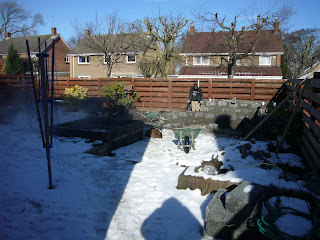 The next week they boys managed to get the walls, seat and water wall/pool block work all finished. We've included small stainless steel rectangular lights and a steel water blade, which are built into the walls as they go. The deck frame was also built at this time. 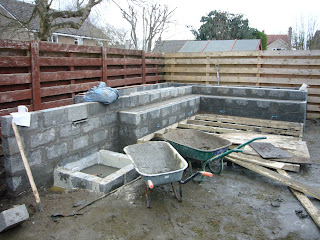 A week later the walls were all rendered and the the lawn laid, which is edged with stainless steel, which keeps it crisp and clean. 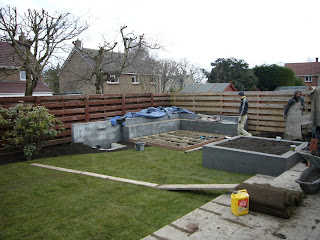 They have done a great job too with cutting away old patio and re-using some stone for new edges and steps. 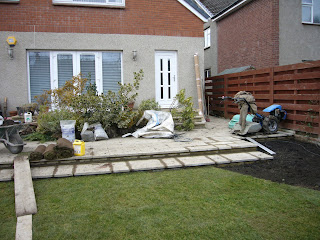 The hardwood deck is now down and the seat topped with matching wood. The boards have been left loose so that we can paint the walls when the weather's better and everything's dried off a bit. We've been trying out various Farrow & Ball shades of off white, which all look remarkably similar! This photo was taken about 10 days ago, at least the lawn is getting a good watering! The fences are being painted a very dark shade of purple, which will make a great back drop to the planting, which should be completed in the next few weeks. More pics then - hopefully in nicer weather... 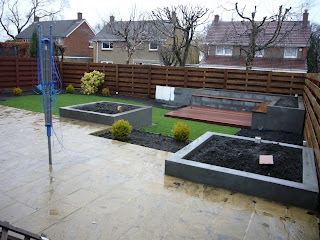 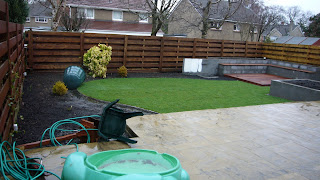 With everything that the weather had to throw at us this was a pretty difficult build, but the contractor and his guys did a great job, as ever. Client seems pretty pleased and looking forward to gardening and sitting in it this summer. I enjoyed the project too - the clients were great, really friendly and enthusiastic. I figured out how to take a fairly dominant feature & make it (hopefully!) feel integrated with the rest of the garden, and learned how to make a wide shallow plot feel a bit deeper, more interesting and usable.
Posted by Tracy McQue at 23:39 2 comments: