We had a Society of Designers (SGD) cluster group meeting in Edinburgh last week, where everyone was to bring their Top Ten plants. There was about 12-14 of us and it was interesting to see the huge variety of varieties that people brought along as theirs. Some were their own personal favourites, others talked about most reliable ones they'd used in clients gardens. I decided to list ten that I hadn't used before this year that I'd definitely like to use in my own garden when we eventually manage to plant it next spring. So here goes:
1) Anchusa azurea 'Loddon Royalist': 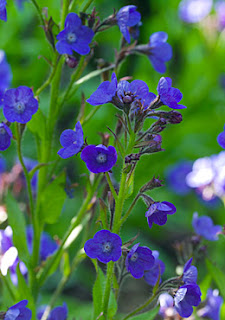 I first saw this at a plant show this May and was bowled over by it's stunning deep blue flowers. It grows to about 1-1.2 m tall, but doesn't seem to need staking. For this reason I used it as an alternative to Delphiniums which the client was keen on & we planted it in a sunny site. It flowered for a long time and was constantly surrounded by bees. Lovely from early summer onwards and worked well with Astrantia Ruby Wedding, Cirsium rivulare 'Atropurpureum' and Echinacea 'White Swan'.
2) Actaea simplex 'Brunette': 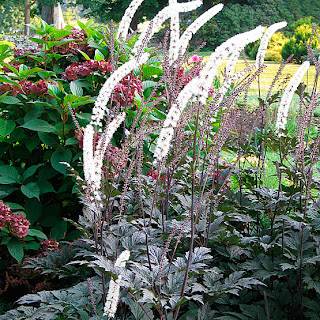 I'm in love with dark foliaged plants at the moment, been asked a lot in the last 18 months to do schemes with lots of purples, reds, dark pink and white - so these works wonderfully. It's again quite tall, reaching well over a metre in clients garden this year. It has pink flushed white flowers from late August onwards, with dark purple triple lobed leaves. It has tiny little round buds before it bursts into flower, which is one of my favourite things about it, so I planted it against the rendered walls of an apartment block I was working on this year and it looked stunning. Used it with Penstemon 'Southgate Gem', Knautia macedonia (more on this below), Lobelia cardinalis 'Queen Victoria' and Anemone 'Honorine Jobert'. It can cope with damp shade too, so what are you waiting for??
3) Pennisetum thunbergii Red Buttons: 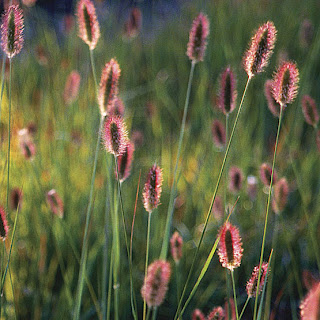 I used this in my own garden a year or two back,  but planted it for the first time in a clients this summer. I'm a huge fan of Lagurus ovatus or 'Bunny Tails', but it's only an annual, so wanted a perennial that would mimic it's habit - this early flowering fountain grass seemed to fit the bill. The bright red blooms last throughout the summer, and reached a height of about 60-80cm. Planted it near Echinacea 'Fatal Attraction', Salvia 'Caradonna', dark pink Astrantia and Sedum 'Autumn Joy'. Lovely, lovely, lovely.
4) Geranium pratense 'Plenum Violaceum': 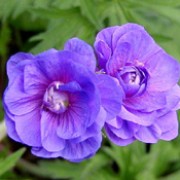 I've never been fond of geraniums, they always made me think (rightly or wrongly) of badly planted public spaces. A combination of seeing how well they were used whilst on holiday in France and moving out to a cottage in rural East Lothian which contained lots of them made me start to realise their merits. There come in many colours, some of which are very pretty indeed. I used this one with double rich violet blue flowers in a traditional planting scheme in the Scottish Borders earlier this summer. Only seems to need moderately fertile soil and can cope with full sun or partial shade. Planted next to the dark purple Iris chrysographes 'Black Form', Hydrangea arborescens 'Annabelle' and Digitalis purpurea f. albiflora it looks great.
5) Knautia macedonia 'Mars Midget': 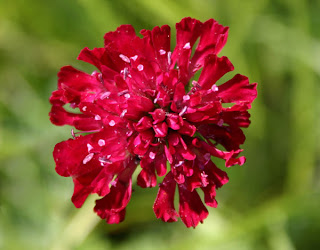 I've been using Knautia macedonia in my own and client's gardens for a few years now, it's one of my absolute favourites. This year I also used 'Mars Midget', which is a dwarf variety which only grows to around 50cm tall. It's flowers compare well size wise to the normal variety, and is just as deep a raspberry colour too. It flowered it's little socks off for ages after it began in July. It's planted beside Imperata 'Red Baron', Penstemon 'Raven' and Achillea 'Moonshine. Purple foliage works well, so also have it near to Actaea and in front of Eupatorium 'Chocolate' (now called Ageratina).
6) Crocosmia 'Emily McKenzie': 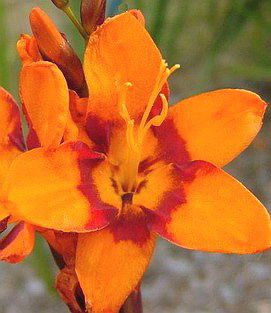 I'm a huge fan of Crocosmias and this one is a beauty. It goes really well with all the purple flowering plants I've been using this year but also is great with purple foliage (Sambucus 'Black Beauty', Heucheras and Phormium 'Black Velvet' to name a few). It has lovely dark red buds which open to dark orange flowers, and a favourite combination of mine are these with the Actaea 'Brunette' mentioned above. It more compact than most Crocosmias getting to about 50-60cm tall and again flowers late into the year. Another late flowering perennial it worked well for me this year was Rudbeckia 'Goldstrum'.
7) Verbascum phoeniceum 'Violetta': 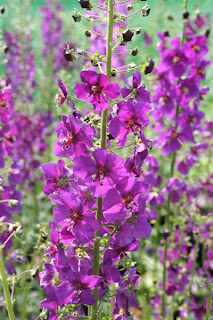 Going through my purple and/or cottage garden phase how could I not include this beauty? It's often regarded as a biennial or short lived perennial, but it's still worth considering. It has the usual Verbascum saucer shaped flowers appear in around May, the colour of which is the most delicious velvety purple. It only reaches about 90cm, so good for smaller gardens. Needs a bit of staking with twiggy pea sticks to stop it flopping over. I planted with other early flowerers such as Aquilegia 'Snow Queen' and Astrantia 'Pink Pride', as well as structural shrubs such as box balls and dark purple leaved Heuchera.
8) Panicum virgatum 'Shenandoah':

I'm a huge fan of the grass Imperata 'Red Baron' so thought I'd give this a go as an alternative this summer. It get a good bit taller (around 80-90cm) and it can cope with drier summers (not really a problem up here!). It starts off green leaves which start to turning dark red at its tips in late June/into July and then burgundy in the autumn. It has teeny weeny pinky red flowers in autumn which shimmer and froth in the sunshine. It's needs a sunny position and looks good with other grasses (I used it near Pennisetum mentioned above) and late summer perennials (Echinacea, sedum, Asters etc). I have also used it nearby Acer 'Bloodgood' which worked a treat. I was super excited to see it planted en-masse on the High Line in New York recently, huge swathes of it planted alongside Rudbeckia subtomentosa. That's a whole other blog post...
9) Schizostylis coccinea 'Alba': 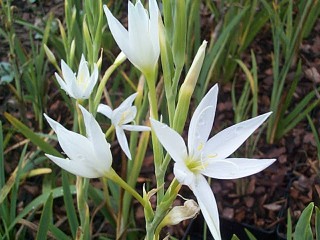 Schizostylis is a well known late flowering variety, I've used S. 'Major' with it's large deep red gladioli-like flowers before, but tried this one for the first time. It has spikes of really distinctive starry white flowers in September and reaches about 60cm high. Looks good again with other late flowering varieties - I used Sedum 'Purple Emperor' and Crocosmia 'Lucifer' and think it'd good good next to grasses too.
10) Thalictrum delavayi 'Hewitt's Double': 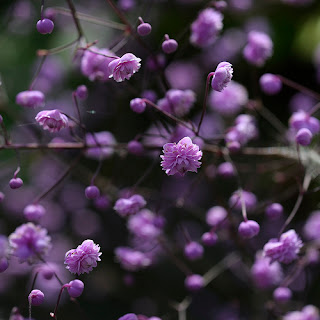 I'm for ever using Verbena bonariensis to get late summer transparent planting and thought I'd try this Meadow rue to see how it fared in a garden in the Scottish Borders where Vb might not too do well. I'm in love. It has dainty light tiny pom pom flowers that looks like a purple mist hovering above all the plants around it. It has dark purple stems, reaches over 1.2 metres tall and we found that when it was grown in a group they don't need any support. They work well with heavier bolder flowers - we had Coreopis, Asters, Echinacea, Anemones and Monarda. They also make great cut flowers.

These are all definitely going in my new garden!
Posted by Tracy McQue at 01:03 No comments: