I've been lucky enough as a designer to work on all different types & sizes of garden design projects and when I look back at the ones I've enjoyed the most it's usually those which are the most challenging - on a steep slope, tiny & dark or like this one. It was completely land-locked, an A-listed house which is in a Conservation area in Edinburgh's Stockbridge. Oh, and it looked like this: 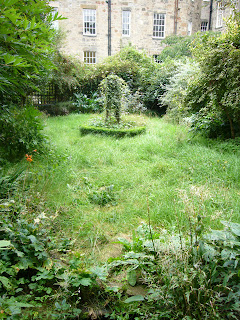 The clients had previously lived in Surrey with a 4 acre garden, so they didn't know where to start getting the best out of the much smaller space. They were giving the 3 storey Georgian town-house a complete overhaul which included moving the kitchen back down to the ground floor with double wooden doors out in to the garden where they wanted to be able to dine & entertain. The also wanted a more secluded private area at the bottom of the garden, for reading & sunbathing. A place to grow some herbs, built-in seating, elements of water and using an Asian influence was also important. All the grass was to go and a majority of the plants too. So as usual a mixture of concept designs and 3D models were used to create a variety of options, of which the client chose this one: 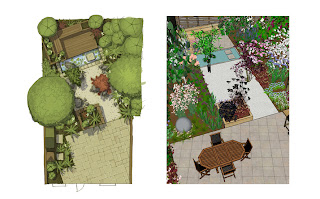 A natural sandstone terrace would be laid leading directly out from the house. A low raised wooden bed adjoins in and gravel path (laid with boulders and planted with bamboos and an Acer) leads down to a reflective pool. A floating stone step leads owners to a secondary more private patio made up of the same sandstone as the main terrace, with a built in 'L' shaped wooden seat, backed by slightly higher planters. The terrace, patio, gravel path are surrounded by planting on all sides. 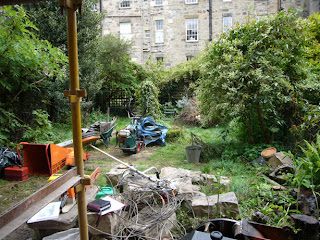 The tricky part of this build was the lack of access, everything had to go in and out through the house which adds a significant amount of time & also presented problems with where to store materials & equipment. On top of this there was scaffolding up and the garden was being used as a spare storage space. Despite this, the contractor & his guys cracked on and even clearing the garden made a huge difference. 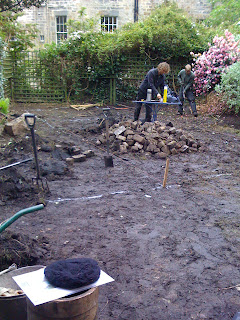 We decided to work from the back of the garden towards the house, so the pale wooden sleeper 'L' shaped seat and raised planter were built first. The guys sanded it down so it was super smooth and even paler in colour, a clear matt varnish applied too. Although most of the plants were removed, we kept a beautiful pink Camellia and a willow leaved pear tree. 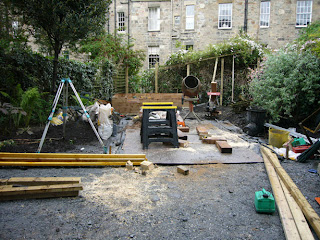 Next the pool had to be dug out. By hand. I wasn't so popular that week. An Acer which had been surviving in a pot from the clients old house was transplanted out too. We kept it really well watered and as dust free as possible and it didn't lose any of its leaves, or seem to suffer. 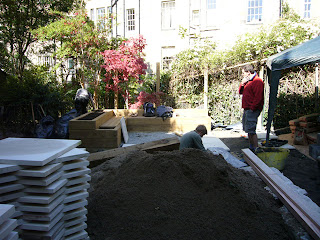 Contemporary horizontal trellis was put up, pool was lined and pillars for floating step was built. The sawn edged buff coloured sandstone arrived. The guys are starting to have problems with where to store stuff safely, out of the way and to keep it clean... 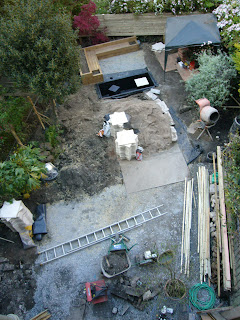 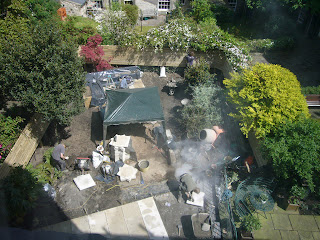 I'm lucky enough to be overseeing the build, so am there at least once a week to see what's happening. At the beginning of projects there always seems to be larger, more dramatic things happening quickly. As we get to the latter stages, we're at the stage of things like planters being built, gravel going down which still has an aesthetic impact. 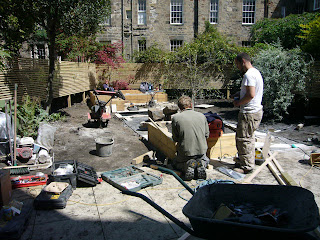 We're on the home stretch at last. The stainless steel water ball is installed, beds are prepared and additional compost & top soil added. 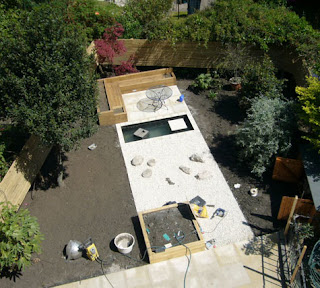 To think that the contractor Dave and only 2 other guys have carefully carried all the old waste out and all the paving (over 40 sq. metres of it),  tons of gravel, umpteen heavy wooden sleepers, top soil, cement, hardcore is amazing enough - but in the latter stages the house renovation was almost complete so they were having to carry stuff without scuffing walls, dropping any debris or making any mess. My heros! 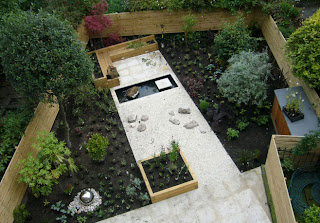 So it was over to me to plant up the garden. The client had asked for a combination of purple, blue and white planting. One side was in semi-shade, so we used Sarcococca, Hosta, variety of ferns, Hellebore, Pulmonaria, Dicentra, Meconopsis, Brunnera & Aconitum. The other was in much more sunshine, so Penstemon, Salvia, Iris, Perovskia, Verbascum and Paeonia were planted. 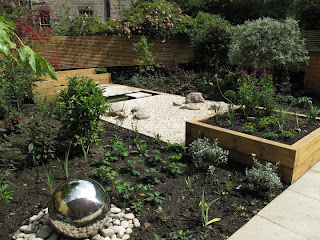 Again the plants had to be carried through a very cleaned and finished house (with a Limestone kitchen floor). It's really nice keeping in touch with clients, not only to see if you can help with any future advice and tidy-ups, but being able to see the garden just a summer later made the tricky and hard work worthwhile. 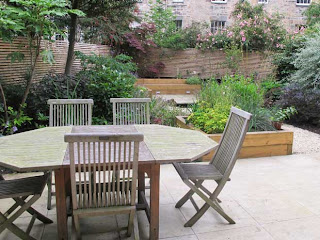 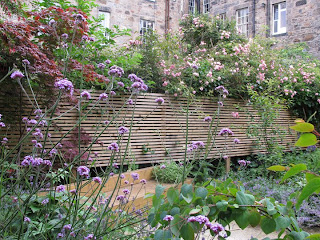 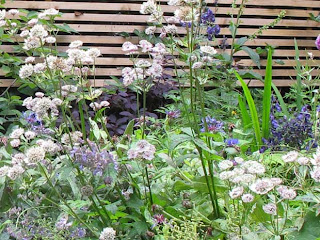 Most things seem to be flourishing, and despite coming through a really bad winter only a couple of herbaceous things need to be replaced. 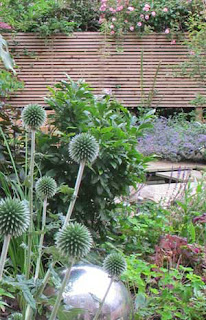 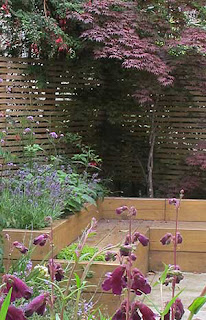 This turned out to be a hugely challenging project for all concerned - the contractor & his guys worked their socks off heaving, carrying and general back breaking work. The clients were very patient, open to ideas, understanding & trusted us not to make a mess of their lovely new home. Although it was tricky to try and make this garden serve many functions, to manage expectations of the clients, gee the guys up when they were having a bad day (1 metre deep pool anyone?) and deal with planners and conservation specialists, I wouldn't have changed this project for the world! What did I learn? That bribing people with chocolate brownies goes a long long way...
Posted by Tracy McQue at 12:30

I love your design and your planting, really good use of space and a fantastic transformation! We also do a lot of through the house jobs and they can be really stressful!

Hi Emma, thanks for the comment, nice to know folks are reading and appreciating. Really enjoyed working on this project, it was great seeing it coming to life again.

as ever a great design, must pick you brains on how much time you put in up front with designs!.
I did laugh that the client seems to have bought the sketch up table and chairs...was it deliberate ? :)

Hey Rosalind. Mail me any time and I can give more info. In brief, I usually roughly calculate a design of this, average, size to be about 40 hours work (survey, design, models, spec writing) and maybe another 5-10 for planting plan.
Think I put idea in clients head subliminally by showing them Sketchup models with table & chairs in so often!